Almost everyone knows Bruce Lee the unforgettable martial art actor, philosopher, instructor, the founder of the Jeet Kune Do martial art system, and widely regarded as the best martial artist of the 20th century. However there are many interesting and sad facts about this great man that are unknown to many of us.

Return of the Dragon

Almost everyone knows Bruce Lee the unforgettable martial art actor, philosopher, instructor, the founder of the Jeet Kune Do martial art system, and widely regarded as the best martial artist of the 20th century. However there are many interesting and sad facts about this great man that are unknown to many of us.

For example, did you know that Bruce Lee ‘Entered the world’ during the Chinese year of the Dragon (1940 November) early morning in the hour of the Dragon? He was born in San Francisco Chinatown. He exited this world when he was just 33, and that happened just one month before his all time hit “Enter the Dragon” was released.

Lee had frequently complained of blackouts and severe headaches a few months prior to his death. But do you know what finally killed the man who had effortlessly knocked out (KO) several opponents in real fights? Strangely he died a few hours after discussing with film producer Raymond Chow about their next movie “Game of Death”.

Amongst the 12 houses in a horoscope the harmful are the 6th, 8th and 12th. If you want to quickly assess a horoscope you need to find out how many planets occupy these challenging houses. If no planets occupy these houses the person is considered very fortunate. Ironically the man who was famous for his great physical strength was born with 6 out of the 9 planets in these unhelpful houses making his horoscope weak. 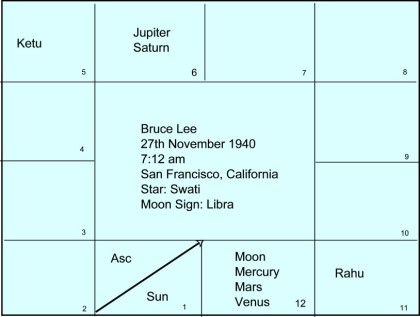 Fortunately there were many strong points in his horoscope that also helped him become a legend in his lifetime. His Moon sign (Libra) is very strong and from here you find many powerful combination that take men to great heights. Moon opposite Saturn and Jupiter, Venus in Libra (own house status), 3 planets with Moon, Sun in the 2nd from Moon are some of the combination that took care of his name and fame.
Leo is the 10th house.
Leo is the King symbolized by the Lion. The 10th house is Leo ruled by the Sun. Sun is on the Ascendant showing a great purpose in life. Alone here, Sun indicates generally good health and robust body which Bruce had for most part of his life. Sun in the 1st house may also indicate a short-tempered person, agitated by Fire element in the body (pitta) and always wanting to be the No.1 which he was but at the cost of great stress. The Ascendant is ruled by Mars the warrior planet but in the sign of Scorpio(n) which stings only when pushed into a corner. If the lord of the 10th occupies the 1st the person may extensively use the physical body all through their life. Sun as the 10th house lord occupies the Navamsa of Libra that is ruled by Venus indicating income as an entertainer using his physical prowess.

Many planets in the 6th and 12th house often got Bruce into problems for no good reason. For example when he appeared on the Hong Kong TV show with host Ho Sho Shin he was asked to display his skills. Bruce demonstrates a technique and Shin is hurled across the stage. However this show of power angered the press. There were several such incidences in life. But why go near a Lion? You ask for it and you get it!

Why was Bruce Lee such a good fighter?

Jupiter in the 6th house according to Bhrigu Sutra an ancient Astrology treatise says that such a person is a terror to his enemies. He had knocked out many of his opponents ranging from professional fighters, boxers to even street fighters. And if that was not enough Lee has Saturn in the 6th house which adds to his invincibility.  Venus as the 12th house lord in the 12th house gives rise to a powerful vipareetha raja yoga (like a double negative becomes positive) that eventually takes the person to great achievements but only after fighting against all odds in life.

The 12th house also deals with spirituality. Many planets here gave Lee the philosophical touch.  Lee majored in philosophy at the University of Washington. His own books on martial arts expose this philosopher in him both inside and outside of martial arts circle.

Many planets in the 12th house may also mean giving away things and knowledge for free. Bruce instructed several World Karate Champions including Chuck Norris, Joe Lewis, and Mike Stone. Between all 3 of them, during their training with Bruce Lee they won every Karate Championship in the United States.

The Putranaash Yoga (short lived children) which is caused by the 5th house lord Jupiter  occupying 6th house caught in between Ketu and Saturn may be the cause of his son Brandon Lee a good actor passing away at the age of 28. Strangely Brandon Lee was acting in a movie “The Crow” a bird that is often associated with Saturn.

Many planets in the 6th and 12th houses indicate short life. Saturn and Rahu are in his horoscope connected to death factors. Bruce Lee died on July 20, 1973 while in Hong Kong soon after taking a prescription pain killer tablet offered by film star Betty Ting Pei to reduce the headaches and muscular pains. He was under the inauspicious Saturn-Rahu-Saturn period. Saturn is in the 6th and Rahu is in the 6th from Saturn and Saturn rules the 64th Navamsa (a point in the horoscope indicating death). Saturn-Rahu period is usually dangerous to life according to Maharshi Parasara who said that unexpected danger to life is indicated if these planets are designated planets of death. The compassionate sage had in anticipation of  threats to life suggested a remedy. (Mrityunjaya Japa Homa, Refer Brihat Parasara Hora Sastra 3200 BC).

The Saturn-Rahu-Saturn period was from 15th July 1973. On 18th July just 2 days before his death a deflector of bad Feng Shui, placed on the roof of Bruce’s home in Hong Kong gets blown off the roof by heavy rain and winds. The deflector had been placed to protect Bruce and his family from bad Feng Shui and evil spirits as previous owners had all been plagued by financial disaster. Saturn the lord of the 4th house in the 6th strongly obstructs remedies to correct a Vasthu Sastra or Feng-Shui fault.

Many people believe that Astrology is a negative approach to life in the sense that once something is known to a person, that person is affected by the words of the Astrologer if he had something negative to say. But if you believe in Astrology or not it works like gravity works. It is not dependent on whether one is aware of gravity or not. Bruce Lee had no knowledge of Astrology or had no knowledge that he was in a period that is called the death period – the maraka period.

Short life has however not belittled the greatness of this martial arts icon. Longevity is being discussed here only to prove that all of us are bound by our karma.

None were suprised when Lee was named among TIME Magazine’s 100 Most Important People of the Century as one of the greatest heroes and icons.

In Bruce Lee’s horoscope Venus in the 12th house as the lord of the 12th is an assurance for moving into heavenly region soon after death.  Hence we are sure that he has taken rebirth in a place where he can enjoy life as a reward of his hard work and philanthropic mind. The action hero was known for films in which he portrayed characters that defended the Chinese and the working class from oppressors. Even after death this great soul continues to help the Chinese. Bruce Lee’s former home in Hong Kong is being sold to raise money for earthquake relief efforts in China, news reports said recently (22nd May 2008).

One of the many statues of Bruce Lee
Death is not to be feared. The following is what Lord Sri Krishna told the great Archer Sri Arjuna (as told in Bhagavad Gita). “…as a warrior you must boldly fight for justice, for you will die one day even if you do not fight. Be the great warrior you are and people will always talk of your greatness and you will thus attain heaven”.  On every July 20th let us remember this great hero.

If you ask me a question with regard to this Knol, whenever I find the time or depending on the genuineness of the question I may answer the question on a separate knol:

Look for your answers here: